Power couple: Mixed reality will help businesses cash in on both AR and VR Historically, VR and AR have been seen as two separate technologies both having unique case uses. VR has been embraced by gaming enthusiasts as a way to make their gameplay more immersive and relies on a display that is worn over the eyes, tricking the mind into believing it is somewhere else. AR uses a transparent display and overlays data onto a real-world setting, thereby enhancing a user’s interaction with their environment in real-time. These differing displays and approaches to how a user experiences the digital content have led to disparate teams working on each.

A group of AR and VR devs gathered around a modern conference table on a sunny afternoon in the English town of Milton Keynes, all eyes are on the man in the helmet. Joachim Latta, IT tech innovator from BMW, is like a kid in a candy store using the DAQRI Smart Helmet for the first time. By using a gaze-based interface and subtle head movements, he’s able to easily access and activate several menu features such as thermal heat mapping and instant video capture. 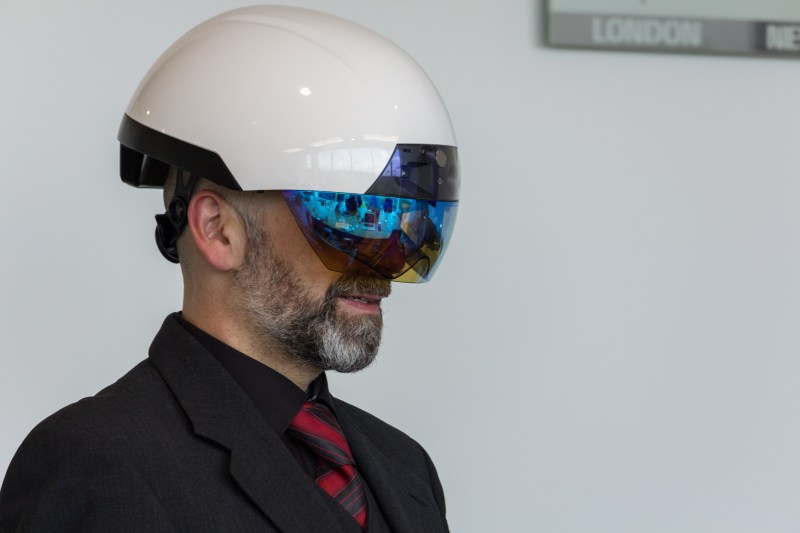 Above: Joachim Latta, IT Tech Manager from BMW, experiencing the DAQRI Smart Helmet™ at TSC’s Innovation Lab outside of London.

The DAQRI demo is the first of many commercial AR and VR experiences planned for this motley crew of tech enthusiasts and experts including DAQRI’s International VP and General Manager, the Director of Glasgow’s School of Art’s School of Simulation and Visualization and our host, Ryan Johnston, GIS Engineer at Transport Systems Catapult.  The goal of the meeting is to break down the silo between current commercial VR and AR projects in order to enable innovation across both platforms for the business applications of the future.

The idea of mixed reality, or combining both AR and VR into a singular experience, has become a hot topic. The most vocal company boasting the potential of mixed reality is Microsoft, who just launched their Windows 10 Mixed Reality Operating System along with an MR headset. This is directly targeted at consumers, is primarily a VR device integrating Hololens advanced tracking and mapping features and requires the user be tethered to a PC. Apple has also developed a platform for their iOS called ARKit which will equip new iPhones with the technology to overlay digital information onto the real world. This would allow innovative developers to create MR apps that could function via a smartphone.

Both of these are ‘MR light’ solutions stripped of the more robust features required for commercial applications, in order to hit a consumer-friendly price point. Higher end, commercial AR and VR developers not beholden to the price constraints of a consumer audience hope to further extend the potential of MR by joining forces to provide a more robust commercial solution. 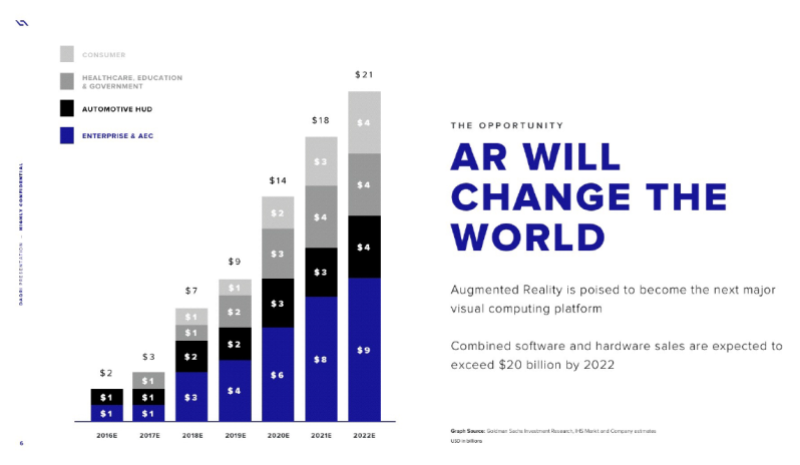 One such AR developer, DAQRI, has developed an AR product line that includes the DAQRI Smart Helmet, DAQRI Smart Glasses and an automotive heads-up display (HUD) that projects information onto automobile windshields. Their current focus is manufacturing and engineering however the applications for their technology are endless. According to Sweeney, “We are focused on industrial applications today as we can solve problems for people in the workplace. Analysts are predicting that 40 to 50 percent of the AR and VR market will be in the industrial workplace sector, so that’s the space we’re looking at.”

However, Sweeney recognizes that there is a pull from adjacent markets, as “DAQRI’s professional grade AR products are a great solution for early adopters in other sectors, as they experiment with their immersive technology strategies”. Goldman Sachs investment research predicts that the entire AR market will climb to over 20 billion dollars by 2022 with the top growth areas including enterprise and AEC, consumer and automotive. For DAQRI, partnering with companies like Transport Systems Catapult will help them better serve these markets.

Transport Systems Catapult is based just outside of London and is a government funded organization designed to help drive innovation and growth in the transport and mobility space. One of ten such programs around the UK, TSC works alongside other programs focusing on a wide variety of sectors including smart cities, offshore renewable energy, digital innovation, cell and gene therapy and high value manufacturing. TSC’s innovation lab at Milton Keynes houses cutting-edge technology aiding in building transport systems for the future. They have developed two virtual simulations to help understand how consumers will react to autonomous vehicles. One that takes the user inside an autonomous vehicle and another that places the user on the street alongside the vehicles. The simulations can be run simultaneously and multiple users can interact together within the virtual space.

The Omnideck, which was originally developed for special forces training, puts the user inside a Vive HTC HMD while walking on a multi-directional treadmill. The result is an extremely realistic experience of walking in a virtual environment with no motion sickness and with very little limitation of movement. Mastering walking on the device is quite easy and addictive and several similar devices are housed for entertainment purposes within gaming arcades.

In TSC’s case use, VR serves as a way to introduce a user to a new environment, one that is currently impossible to replicate in the real world. This is where AR can eventually step in and potentially solve that problem. The AR device of the future, will be able to project virtual elements into real environments seamlessly without wires, the use of hands and eventually even without any type of HMD. The DAQRI headset and glasses already are solving this problem on a smaller scale within the manufacturing sector. 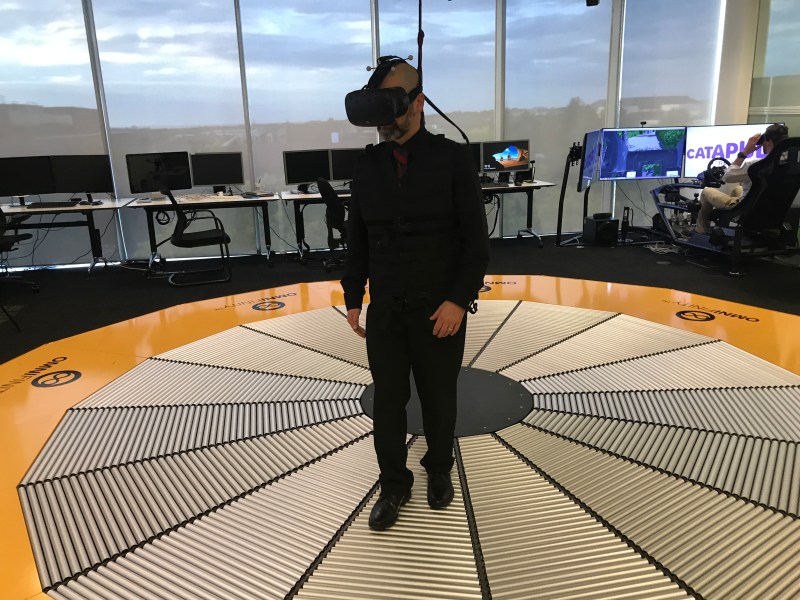 Above: BMW’s Joachim Latta experiencing the Omnideck as it simulates walking in a city that has a fleet of autonomous cars.

Paul Chapman, Director of GSA’s School of Simulation and Visualization, or SimVis for short, has a commercial team working on several projects using 3D virtual models to improve the safety and effectiveness of complex tasks. One such project uses a VR experience to help train nuclear reactor inspectors navigate ‘dark sites’ to ensure they are being properly maintained. These sites are extremely dangerous to navigate and allowing inspectors to practice in a virtual environment helps to ensure their safety. Chapman was also excited to experience the DAQRI helmet first hand, as combining the AR functionality with SimVis’ highly accurate 3D models could allow inspectors to access the materials in new ways and perhaps even in a real-time working environment instead of a simulation.

Both commercial VR and AR have been adopted across industries where the relatively high-cost has been offset by a bottom-line ROI demonstrated by more efficient and effective ways to work. In the past these technologies have been independent of one another but the biggest disruption lies in the combination of both technologies. According to BMW’s Joachim Latta, “these two worlds will merge together. You will have one type of delivery device, such as glasses, that will provide you with AR functionality alongside full VR functionality in your environment real-time.” Gartner VR/AR analyst, Brian Blau, agrees with this prediction and believes the market will start to see these type of ‘mixed’ devices as soon as 2020.

In order for such a vision to become a reality, our group of experts agreed upon a few key factors. It is essential to ensure that developers and designers have the skills required to build these amazing new products and experiences. Traditional academic programs aren’t nimble enough to keep pace with technology and therefore a skills gap is being predicted. Chapman believes SimVis is unique in that it brings together scientists, engineers, content and graphic designers, psychologists and a handful of other highly specialized professionals to provide the highest quality commercial VR content and degree programs in the world. There is also a need for better collaboration across technologies, industries and companies. The digital era is blurring the lines between real and virtual, commercial and consumer. In order for true innovation to happen quickly information needs to be shared openly and globally.

The Milton Keynes meeting is one small step toward building a global community of innovators and advocates working together to shape the future of IT innovation. Our host Ryan Johnston sums it up this way, “there is a huge amount of potential in bringing together people from the automotive industry, from construction and other industries to help innovate. Bringing people together is a big part of the reason we’re here.” Perhaps this meetup was the start to several conversations and potential partnerships that will bridge the gap between AR and VR and one day transform our experience of the world around us.