User generated content in Second Life houses MANY representations of big brands, such as Converse, created by brand advocates.

In the final chapters of his book, Convergence Culture, Jenkins (2006) outlines the characteristics of a paradigm shift to a ‘participatory culture’. He cites many examples of the tensions that are arising between the old mass media and the new media revolution. The digital tools that have allowed the average consumer to find a voice online and create user-generated content are also being exploited by larger brands, attempting to mimic this grassroots phenomenon.

As I read Jenkins (2006) observations, I was struck by what may have been an unintentional experiment testing this new paradigm. Many of the issues raised in the text, reminded me of events that had transpired years before in a virtual world called Second Life. SL, as it’s referred to by insiders, was started in 2003 and is COMPLETELY crafted from user-generated content. The platform gained popularity briefly but never quite made its way onto the list of mainstream social networking platforms.

SL had several obstacles keeping it from going mainstream, ranging from technical issues and a steep learning curve to adult and x-rated content. The latter, coupled with the old media’s focus on what they deemed as unacceptable content worked to marginalize the entire SL community. Jenkin’s (2006) sums it up this way, “Old media still defines which forms of cultural expression are mainstream through its ability to amplify the impact of some user-generated content while labeling other submissions out of bounds.”  Articles like the recent post, Second Life: what went wrong?, focused on the platforms adult content getting into the hands of children. The author calls SL ‘a disturbing hive of graphic sexual content, extreme rape fantasies, and vendors selling webcam sex…children were inhabiting some of the most hardcore locations’. This may be true but children are accessing porn on the Internet everyday and I don’t hear a call for turning ‘off’ the Internet. Just like the web, SL houses a myriad of communities OTHER than those that are adult-themed.

My friend and old SL resident, Draxtor Despres, has made it his mission to tell the stories that mainstream media has chosen to overlook. An amazing example of user-generated content, his YouTube channel houses dozens of expertly crafted videos telling a very different SL story. There’s the video about an elderly women with Parkinson’s who is finding renewed vigor thanks to her time in SL. The video outlines how mirroring what her avatar does on the screen actually strengthens her neural pathways in real life and allows her better mobility.

Another story outlines the flourishing fashion industry in SL and explores the relationship between avatar and real-life.

Back in its heyday, SL was seen as a promising alternative for virtual learning. Many institutions created SL islands and universities. Educators worked to provide online students with a more engaging environment. Today many of the university campuses have disappeared and online learning has moved in a different direction.

Educators my have overlooked the fact that learning happens in a very different way in SL. Instead of learning in virtual classrooms, SL residents learn by interacting with the virtual environment. Jenkin’s (2006) references “scaffolding” as a means to help students try out new skills. He describes it this way, “In the classroom scaffolding is provided by the teacher. In a participatory culture, the entire community takes on some responsibility for helping newbies find their way.” This is VERY much a part of SL culture. The older, more experienced SL residents take it as their duty to help ‘newbs’ maneuver the steep-learning curve that is required to truly enjoy SL. The learning happens by attempting to navigate and participate in the community.

As SL was becoming more popular and recruiting more die-hard users, brands decided they wanted to market to this extremely desirable demographic. Several corporations, including IBM, coca-cola and KLM, built an in-world presence. In very much the same way consumers have rejected ‘astroturf’ or FAKE grassroots media, SL residents rejected big brands attempting to hijack their virtual community. Corporations attempted to use this new media platform to sing the same old song – buy our products. They built virtual cars, virtual clothes, virtual jewelry, virtual beverages and expected residents to assume some sort of brand affinity. Instead of speaking the language of the residents and giving them the power to assume an active role in their brands, companies attempted to control the message. This was a HUGE failure. IBM, who once held global company meetings in SL has left all but left the space. Companies have pulled the plug on SL but instead of gaining some self-awareness of how they could have better engaged this community, they simply deemed all of SL a huge waste of time. 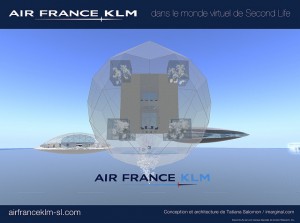 The branding that survives in SL today are the items that have been built organically by SL residents and NOT corporations. You can still find Converse sneakers and virtual Starbucks coffee shops. Are these brands aware that their brand has been co-opted by virtual avatars? Probably not. Years ago these brands may have tried to shut down this type of content.  What would they do today?

Looking at these virtual content creators through the lens of today’s marketers, we see a group of brand advocates replicating items they love in SL. These are the consumers of marketers dreams, referred to as the ‘loyals’ in Jenkins (2006) writings. Marketing luminaries, such as AdAge editor, Scott Donaton, realized years ago that attempting to control the narrative would have negative effects on the brand. Second Life has proven this to be true.