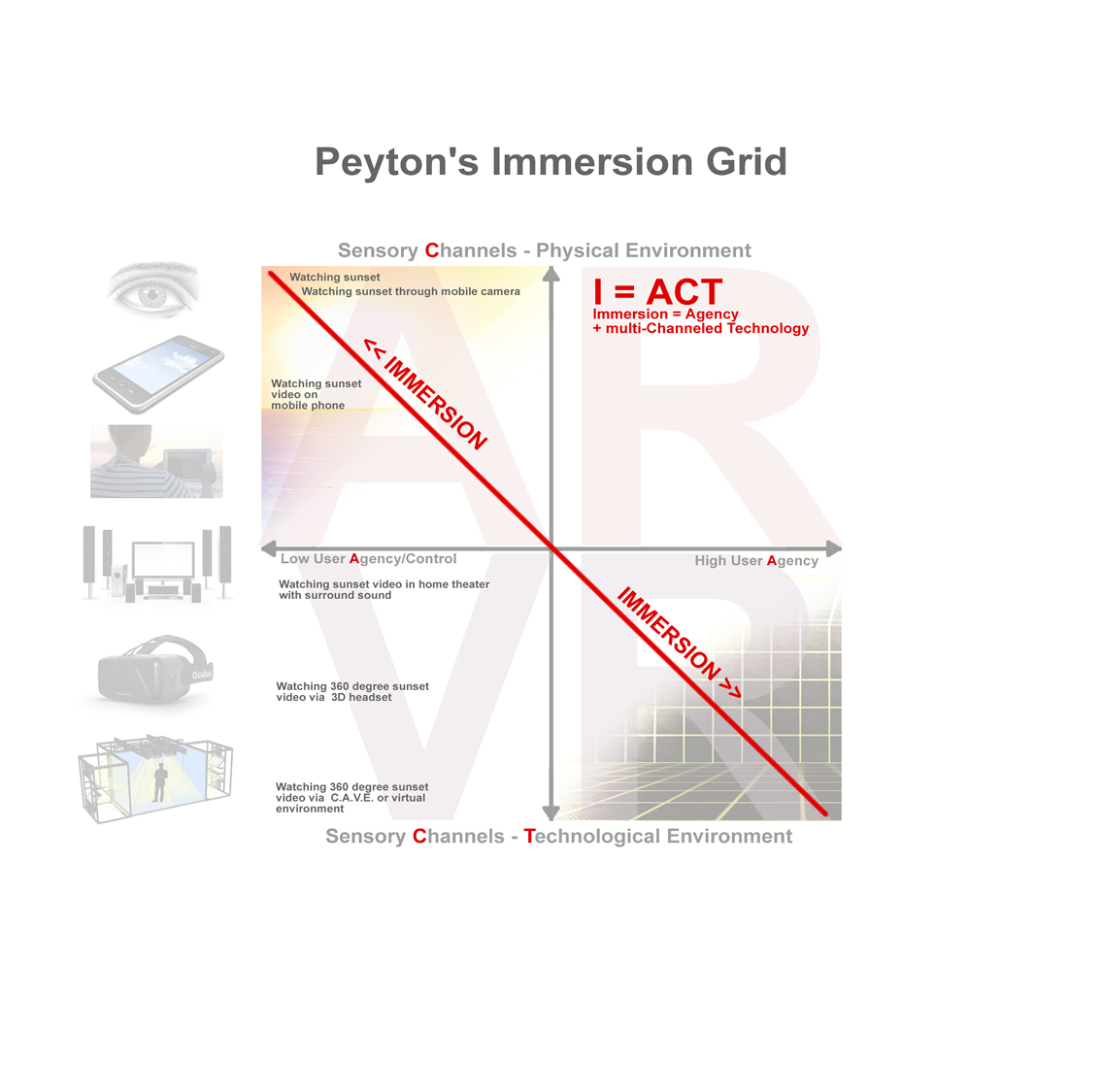 What causes immersion? As the digital revolution rages on, technology has been both blamed and lauded for capturing more and more of our attention. We have been given the tools to tell stories in new and exciting ways, access to data that has never been available before and the ability to connect to a fully realized digital universe. As digitally connected citizens, we are constantly bombarded with incoming messages and have become adept at tuning out endless amounts of ‘noise’. So what then CAN capture and keep our attention? An array of augmented reality and virtual reality applications or ‘immersive media’ experiences are being developed across various sectors and engage users like never before. The immersion grid has been developed to help compare and contrast these applications and predict how likely they are to be truly immersive.

‘Immersion’ is simply defined by Webster’s dictionary as ‘deep mental involvement’. Wikipedia goes a step further and outlines virtual reality ‘immersion’ as “the state of consciousness where an immersant’s awareness of physical self is diminished or lost by being surrounded in an engrossing total environment.” These definitions are further supported by the work of Csíkszentmihályi or the father of ‘flow’. His research has led to the uncovering of six factors that contribute to a state of flow or total mental involvement in an activity. They include (Nakamura & Csíkszentmihályi, 2001):

An alternate explanation of immersion, as outlined by James Madigan, includes the concepts of spatial presence and involvement. Spatial presence is the ability for the media user to feel they are actually a part of the digital environment. Involvement measures the amount of agency or freedom the user experiences in the environment. In other words, how much they can alter or impact the narrative or plot. Madison outlines factors that can contribute to both creating the sensation of spatial presence and involvement, they include (Madison, 2010):

This research served as the foundation for the hypothesis that high levels of user agency (A) or control coupled with digital technology (T) that engages multiple channels (C) of sensory information would lead to more immersive experiences (I). The immersion grid tracks user control or interactivity on the Y axis and the level of digital technology engaging the senses on the X axis, thereby providing a framework to determine the level of immersion.

The immersion grid is intended to help media professionals, researchers and application developers predict how immersed a user will become in an experience. It also provides a framework to categorize the myriad of related augmented and virtual reality experiences currently available to consumers. Several commercial applications have been plotted on the grid based upon the degree of user agency and senses engaged by the technology. These have been categorized based upon the industry or sector utilizing the application. The categories include Film, Journalism, Retail, Healthcare, Social Networking, Industrial, Experiential, and Technology. 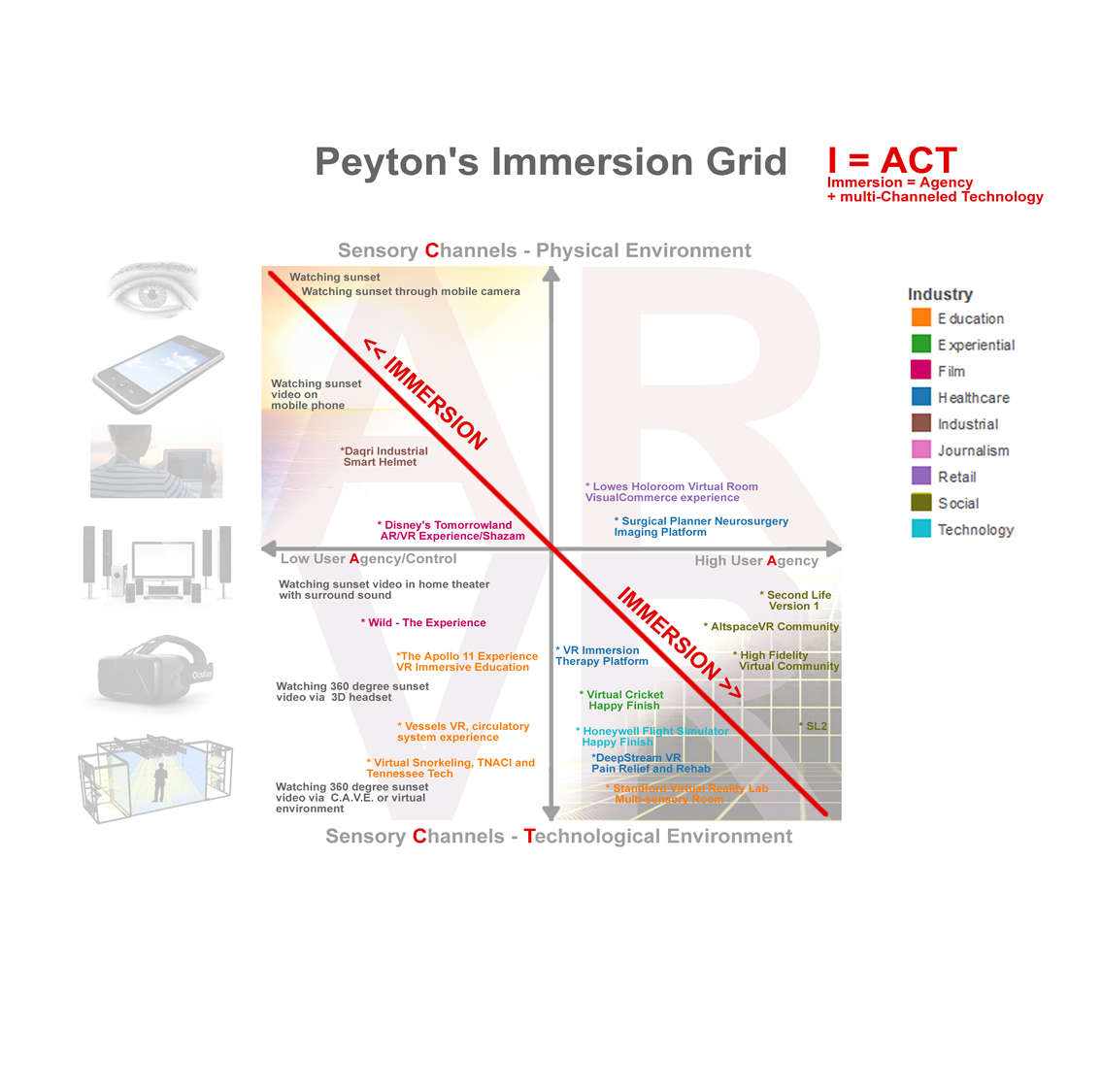 Based upon the principle that effective visualizations show ‘causality, mechanism, explanation, and systemic structure (Tufte, 2006, p. 128)’, the immersion grid attempts to show a correlation between two variables, agency and technology, that research has shown to help immerse a user in an activity.

In order to prove the hypothesis that Immersion = Agency + multi-Channeled Technology immersive media experience participants could be surveyed to determine how deeply involved they were with each application. This participant data could then provide evidence either supporting or refuting the correlation between agency, digital technology, and immersion.

Madigan, J. (2010). Analysis: The Psychology of Immersion in Video Games Retrieved from:

McCandless, D. (2014). What Makes a Good Visualization? Retrieved from http://www.informationisbeautiful.net/visualizations/what-makes-a-good-data-visualization/