VR’s Breakthrough Moment: What Will it Take? 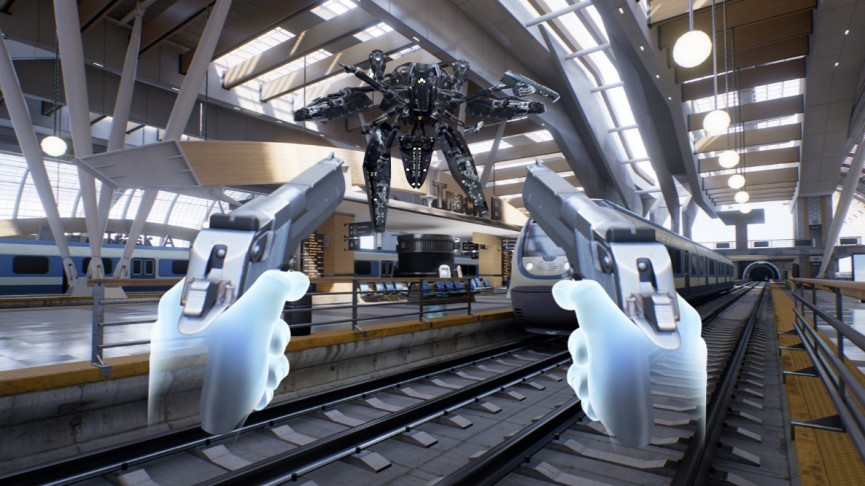 In just a couple of decades, virtual reality has moved beyond science fiction to become a very real part of people’s lives. Experts describe advances setting the stage for VR to go mainstream.

Surrounded by clear blue water, a diver examines the bow of a sunken ship. A stingray gracefully glides from the depths of the ocean floor, practically grazing the diver’s face. An 80-foot blue whale emerges from the depths and the diver’s heart races as she stares into the brown pool of his curious eyeball. She can’t help but reach out to touch its dorsal fin.

But instead of feeling the whale’s long, thin flippers, her hand is met by the familiar feeling of her office cubicle. This diving trip didn’t require a SCUBA license or even a wetsuit. Instead, it relied on a virtual reality (VR) headset, a PC and a $9.99 purchase of theBlu software.

The whale experience is just one example of how VR technology can transport anyone from the real world to an entirely virtual one.

“VR conjures up a set of images and other properties that drive your senses to forget where you really are,” said Kim Pallister, Director of Intel’s Virtual Reality Center of Excellence.

“You really start to believe you are someplace else.”

Heading up the VR project lab in Hillsboro, Ore., Pallister and his team are working to bring VR to the masses. He believes advances in hardware and compute power enabling high-quality VR experiences are enough to finally give VR its breakthrough moment.  That breakthrough is opening new possibilities for fusing VR and AR into merged reality experiences that bring the real world into digital experiences in real-time (read How Computer Vision is Transforming VR into Merged Reality).

VR, Then and Now

Today’s VR headsets or Head Mounted Displays (HMD’s) are more affordable and offer higher quality graphics than ever before. Pallister recalls the first time experts attempted to push the new technology throughout the 90’s.

At that time, the cost was too high and the graphics were too poor to entice the general public to adopt the technology. Today, Pallister said, those challenges are eroding with the advent of higher powered processors and smaller, more affordable visual displays.

“Mike Abrash, the lead scientist at Oculus, said ’affordable, high-quality, VR is the peace dividend of the smartphone war,’” recalled Pallister. He said this explains how consumer demand for high quality, smaller phones inspired improvements in quality of display and sensor technology, while driving prices down. Those same components are now being applied to VR.

The last twenty years have seen dramatic advances in both the hardware and software required for a truly immersive VR experience. Some of the earliest computer games used simple text boxes to create imagined spaces and environments in the minds of the player. The player would type in ‘Lights on’ and the gaming program would respond indicating that the lights had indeed been turned on.

This type of interaction between computer and human formed the underpinnings of today’s interactive experiences. Instead of simple text, 3D gaming graphics of today are hyper realistic and game play allows players more freedom and agency than ever before.

Not Ready for Prime Time Yet?

Companies like Google and Samsung have developed lower cost, mobile VR experiences that convert a cell phone display into a VR viewer. Google cardboard, for example costs less than $20, and Samsung’s Gear VR mobile headset comes it at under $100.

While this break in price point eases the burden on consumers, some argue that the lower quality experience offered with mobile VR is still preventing mass adoption. The most immersive experience still requires a significant investment for a high-quality headset and a computer that can handle the additional compute requirements.

Cost isn’t the only challenge. VR headsets can be clunky, cumbersome and require a tether to the PC. Even tech enthusiasts are resistant to wearing these devices for hours at a time due to physical discomfort. Some experiences also require handsets and controls that require substantial time and expertise to set up.

Mass adoption of VR also requires a psychological evolution. In the same way the internet was initially met with fear and resistance, some psychologists fear VR poses a threat to the mental health of users.

“Reality is fragile and complex,” said Sherry Turkle, professor at MIT and the founder and director of the MIT Initiative on Technology and Self, in a recent New York Times article.

“It demands a lot and we are fatigued. Addressing real problems begins by seeing them clearly,” she said. “If we are not vigilant, seeing the world through a lens – albeit not darkly – can be a first step toward accepting a dreamscape as sufficient unto the day.”

Although some are fearful of the mental impact of VR experiences, Pallister said VR is already benefiting industries like education, retail, architecture and healthcare.

In classrooms across the U.S., students are taking virtual field trips with the help of Google Cardboard. Instead of reading about the pyramids in Egypt, for example, students are transported to a 3D, life-size rendering, where they can actually explore the amazing structures.

VR helps developers create environments that don’t yet exist, allowing builders and architects experience a planned space, get a sense of scale and make changes before committing to the final version.

Ikea took this concept and created a consumer shopping experience, allowing customers to create virtual kitchens and other living spaces designed with 3D, virtual Ikea products. Shoppers can determine if their chosen Ikea furniture is the right size, color and style and then make a better purchase decision based upon this information.

The healthcare industry has also benefited from virtual reality technology. Doctors can train using 3D modeling and simulated surgeries. These types of medical VR applications can reduce the costs and risks associated with intricate medical procedures.

Pallister and his team are working to improve the overall VR experience and bring down the cost to consumers. The team is working on a high-quality wireless headset, experimenting with existing technologies like the lightweight Depoon. It operates on WiFi, which limits the graphics quality. By using a faster wireless technology like WiGig, which nearly doubles WiFi’s top speeds, Pallister hopes to allow for the highest quality graphics over a wireless device.

Another approach to helping VR make it into the hands of the average consumer is minimizing the required compute power to enable the best VR experiences possible. Pallister’s team is looking into off-loading some of the required processor power to the visual display unit within the HMD. This would then allow consumers to buy a super powered headset that could run immersive VR experiences on less expensive PCs.

“We have a ton of Intel technologies either existing today or in development, that will improve the whole VR experience over time,” said Pallister. For example, sensing capabilities available through Intel’s RealSense technology opens up worlds of new possibilities.

“VR is not a thing that we all get excited about this year and then it’s done. VR in five years is going to make today’s look horrible, and in 10 years it’s going to be even better.”